While nobel prize winner Orhan Pamuk may be the only Turkish author many westerners are familiar with, I was happy to discover a wealth of other Turkish writers in local bookstores in Istanbul during my residency at maumauworks in June. I was drawn in particular to two short story collections by Turkish women: Istanbul In Women's Short Stories  (editor, Hande Ogut) and Europe in Womens Short Stories from Turkey, (editor, Gultekin Emre). Both are published by Milet Publishing.


Sadly my friend Asli Erdogan was out of the country during my stay. I met her at a literary festival in Indonesia 10 years ago and would love to have caught up. She is on the wikipedia list of Turkish women writers along with popular authors Elif Şafak and Buket Uzuner whose novels are best sellers in Turkey. However there are many other authors not included on this list like writers Naz Cuguoğlu, Sine Ergün and Gönül Kıvılcım who I met at maumauworks during my stay.


Naz  Cuguoğlu is a short story writer who has been writing since she was young. She used to write memoir but now prefers the short form. Her magic realist stories centre on male characters dealing with everyday issues. A graduate in social psychology she has volunteered in culture labs in Turkey, Nicaraguara and the US. She has worked in an Istanbul-based gallery and frequently contributes reviews and interviews to publications like Istanbul art news, Artful Living, Trendsetter or KLOK. Naz currently curates exhibitions and manages residencies at maumauworks. She recently took part in a writer's residency in Barcelona. 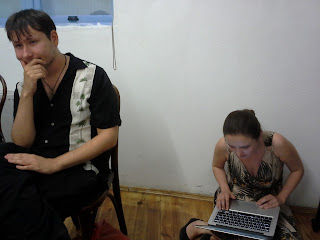 Sine Ergün  the founder of maumauworks, also likes magic realism and Raymond Carver. Her stories are about the small details of life. She has published two short story collections,  Bazen Hayat and  Burası Tekin Değil  and is part of an anthology Kadınlar Arasında edited by Murathan Mungan.  Currently working on her third short story collection she was recently a writer in residence in Iran and is now in Buenos Aires working on her publishing deadline.Sine (in her early 30s) has a plan to publish seven books and then stop writing. She is curious to see what it will be like to live life without writing about it. 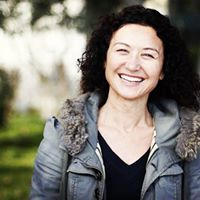 Gönül Kıvılcım has published a number of novels and written for magazines, online journals and the theatre. She lived and worked as a journalist in Germany for many years before returning to Istanbul to live. After returning home she worked at Channel 6 and Radikal. Her books are:
"Small Town Lies", Life Publications, 2001, "Razor Boy.", Life Publications, 2002, "Partially Love"  Everest Publishing, 2004, "Karakoy The Living Witness", Heyamola 2010, "Crime Palace" Support Verlag, 2011, " Dad's Best Photo " Detail Publications,  2012.

Gönül brings a journalists's sensibility to her work, dealing with issues of homelessness and street kids in her novel, Razor Boy, and the stories of ordinary people in Small Town Lies. Her fourth novel which she spent a whole year researching, will soon be finished. Gönül is passionate about writing,  telling me she takes over every corner of her apartment pinning notes and paper to the walls. She doesn't mind the lonlieness of the long distance writer either. You have to be alone to write, she says. When I have a bad day, I just read. 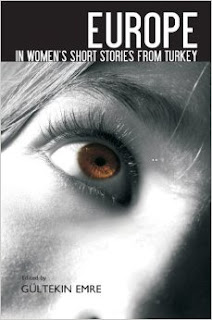 I took Gönül's advice and when the writing wasn't flowing I disappeared into the two collections I had bought. In fact for a while, day became night became day, as I couldn't stop reading. I read Europe first and next Istanbul, and was glad I had this smorgasbord of women writers to dive into.

One of the reasons I wanted to read Turkish women writers was that on the street (especially my street which I renamed, Yelling Street), Turkish men are the dominant presence, and I longed to know where the women were, what they were doing, what they were thinking and feeling. These two volumes containing women writers of varied ages and varied writing styles gave not only answers, but connected me with feminine insights so exquisitley expressed I was able to recognise a shared experience of womanhood while appreciating the huge cultural difference between us. It was as if I was reading the stories of sisters from whom I had been separated at birth.


My favorite authors are Erendiz Atasu, Susan Sumanci and Mine Sogut.Gonul has a story in Istanbul as well. Gaye Boralioglu's story about a working woman who watches her husband gasp and die on the long train trip home from work, and just gets off the train without him, is stunning. As is Erendiz Atasu's story of a woman making love to a gondolier. There's strength and fragility in the writing of all these stories, a tender eroticism and power, humour and irony, and there is no better way to get to know a city than through its literature.And they give a nice balance to the melancholy of Pamuk's writing. A friend warned me against reading Pamuk while I was here. She said she had read his novel Snow before she went and couldn't shake the feeling that it was haunted by the ghosts of empire. There is no risk of that in these stories. While melancholy may weave its way through some of the narratives, it is always imbued with the practical realism of a Turkish woman's point of view.

The foreward to the English version of Istanbul by translators Idil Aydogan and Patricia Billings states...
.
"This collection does not present its reader with an idealised Istanbul, where East meets West. Rather Istanbul is a place where over the centuries East and West have engaged in a testy relationship, pushing and pulling, repelling and attracting with the ebb and flow of the Bosphorous, leaving its inhabitants in a constant struggle — a struggle for their identities, those they express for all to see and those they feel inside.

With contributors born mainly between 1940 -1970 who are not just Turkish but Greek, Kurdish and Armenian backgrounds this collection represents the works of different generations and cultural groups."

I cannot sign off without mentioning the excellent team of translators in both volumes. Without them we foreigners would miss the great pleasure of losing ourselves in these stories.

Watch a fanstastic talk on You Tube by Patricia Billings "Turkish Literature in Translation"
Recent Developments, Ways Forward and Global Trends, given at the London Book Fair in April 2015. 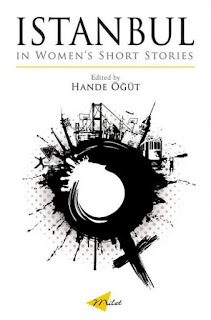 Jan Cornall was writer in residence for three weeks in June 2015 at Maumauworks in Istanbul.
Her residency was funded by CAL, The Copyright Agency.
Many thanks to Naz and Sine from Maumau, and to CAL for a great residency!