Pamuk's Istanbul and my Garage of Memories

On the day I arrived at maumauworks in Instanbul for my three week writers residency, Sine (maumau founder) and Naz (maumau administrator) told me about the Museum Of Innocence. It's just nearby, they said. Have you read the book? 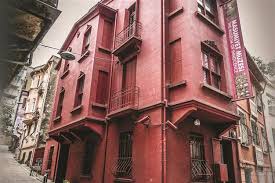 I'd been reading Orhan Pamuk's book Istanbul in preparation for my trip, but hadn't heard of his novel The Museum of Innocence which was written only after he started collecting for his museum.

Sometimes you have to travel half way across the world to receive a special book recommendation, but I had no idea I would be able to enter the world of his novel is such a tangible way. 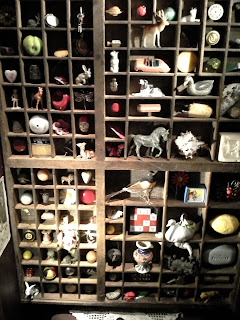 I'm always reminding my students of the importance of creating the world of their stories, suggesting they make a scrapbook or collect objects in a bag or a box. I did this even before was a writer and still do. I have a garage full of secret caches stashed a way containing pieces of fabric, old letters, trinkets, photos, postcards, keys, fragments of soap, empty perfume bottles, rings, cufflinks, my father's psalm book, my mother's sheet music, my childrens umbilical chord clips, and so on. The bags and boxes line the wall draped with various collected pieces of Japanese, Rajastani and Batik cloth. Some of my mothers paintings are there and a couple of Matisse prints torn from a calendar that used to hang in her kitchen. Random things too like an America Indian headress from a costume shop, some antique wayang kulit puppets, a naked shop dummy strung with leather belts, a moth eaten Chinese parasol.

In the middle I've set up a large work table, big enough for six or eight people to sit around, where I sometimes hold petite bookmaking workshops, but mostly it's a place where I go to order my thoughts, to rustle about, to move memories around or to muse on my next creative project. 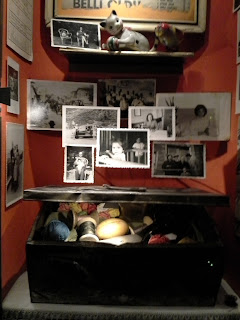 While some might want to call my collecting habits hoarding, I always defend myself, muttering about the importance of archiving, referencing, keeping creative materials on hand etc. but since visiting Pamuk's museum and reading his novel, I am able to understand something new about my garage of memories. 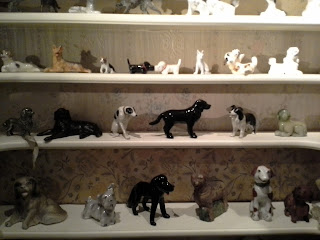 Pamuk says in an interview for the Huffington Post...

"The habit of collecting, of attachment to things, is an essential human trait. But Western civilization put collecting on a pedestal by inventing museums. Museums are about representing power. It could be the king's power or, later, people's power.....In my novel, where (the protagonist) Kemal collects the tea cup, cigarette butts, bedroom door handle and other items of Fusun, he is building a museum not to power but to the intimate experience of love, to an individual life. My point is that, whatever a life is made of, its dreams and disappointments, is worth taking pride in."

If you haven't read the novel here's the blurb...

"It is 1975, a perfect spring in Istanbul. Kemal and Sibel, children of two prominent families, are about to become engaged. But when Kemal encounters Füsun, a beautiful shopgirl and a distant relation, he becomes enthralled. And once they violate the code of virginity, a rift begins to open between Kemal and the world of the Westernized Istanbul bourgeoisie. In his pursuit of Füsun over the next eight years, Kemal becomes a compulsive collector of objects that chronicle his lovelorn progress—amassing a museum that is both a map of a society and of his heart. Orhan Pamuk’s first novel since winning the Nobel Prize is a stirring exploration of the nature of romance."

In the Huff Post Pamuk goes on to say...

"In building my own museum in Istanbul, I am very close to my character Kemal. I don't want to exhibit power but express my interiority, my spirit. A museum should not be flags--signs and symbols of power--but intimate works of art. It should express the spirituality of the collector. "

" I identify with Kemal's attention as a lover to his beloved because it is like a novelist's attention to words. In the end, being a novelist, in a way, is loving the world, caressing the world with words. It is paying attention to all the details that you have lived and experienced. This book is my most personal, intimate book. It is all the things I have lived and seen in Istanbul in my entire life. It is a panorama written with loving detail."

"At the age of 60 I am less experimental and more mature. I want most of all to convey my understanding of life. And writing novels for 35 years has taught me great humility. It has taught me to be respectful of how marvelously detailed the world is. Again, this is very close to a lover's attention to his beloved's every movement, her gestures, angers and silences. To notice everything is to care for it.

There is indeed a kind of Sufi or Pan-theistic quality to this love for the world, as is also suggested by Buddhist mindfulness." 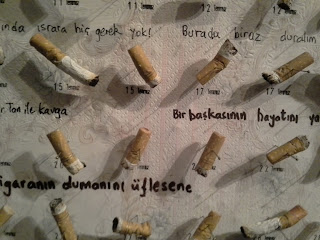 My apolologies for pulling out such lengthy quotes from the interview, but so much of what Pamuk says about life, love and writing is immensely inspiring and validating. 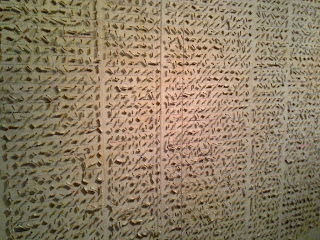 Visiting his museum has helped me understand the peace I feel deep in my garage surrounded by the memorabilia of my life,  and why as much as I try, I can't throw my bits and pieces away yet. As Pamuk says, they are a touch stone to all the ways one has lived and is still living; a life filled with all its happinesses and sadnesses,  all its successes and dissapointments.

I enter my garage in a different way since returning from Istanbul. I view my objects with more love. The tinge of shame is gone. I'm thinking to make an inventory. If I don't have time to tell each story I can at least give each object a line. Instead of having a garage sale, I'm thinking to have a viewing time, maybe on Sunday afternoons. I can serve tea and scones, on the family china that sits in a box at the bottom of one of the stacks. 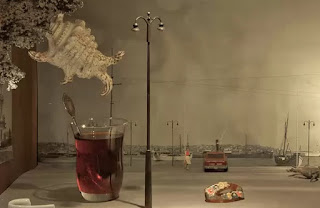 Read a Guardian review of the novel Museum of Innocence here.

Read all about the actual Museum of Innocence here

If you can't get to Istanbul, the book Pamuk has written about the museum, The Innocence of Objects, is almost as good as the real thing. It details the background to the museum project and takes you through the exhibits chapter by chapter with excellent photos and excerpts.

Read about other Turkish authors I discovered in another great book by contemporary Turkish women writers, - Istanbul in Women's Short Stories.


Jan Cornall was writer in residence for three weeks in June 2015 at Maumauworks in Istanbul.
Her residency was funded by CAL, The Copyright Agency.
Many thanks to Naz and Sine from Maumau, and to CAL for a great residency!